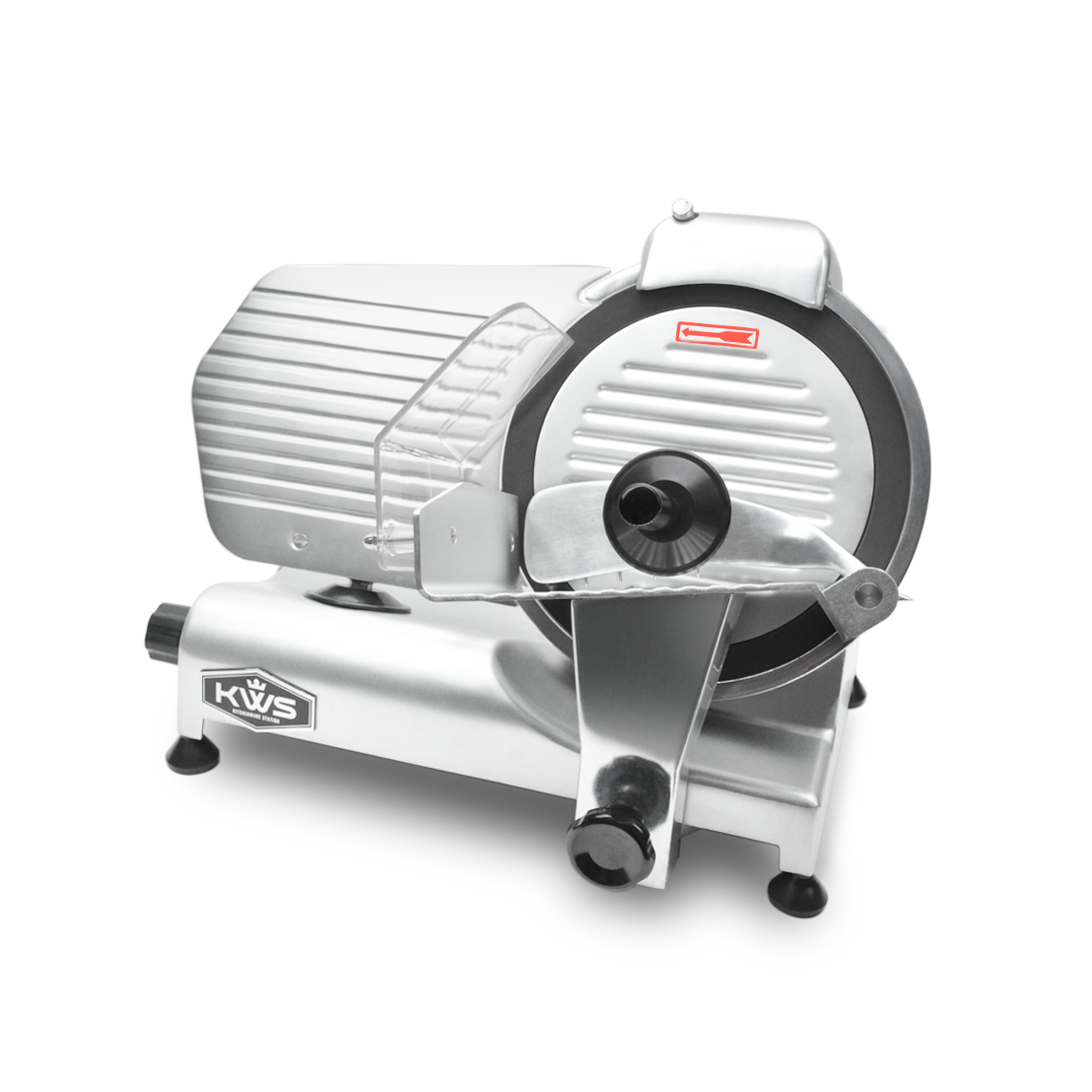 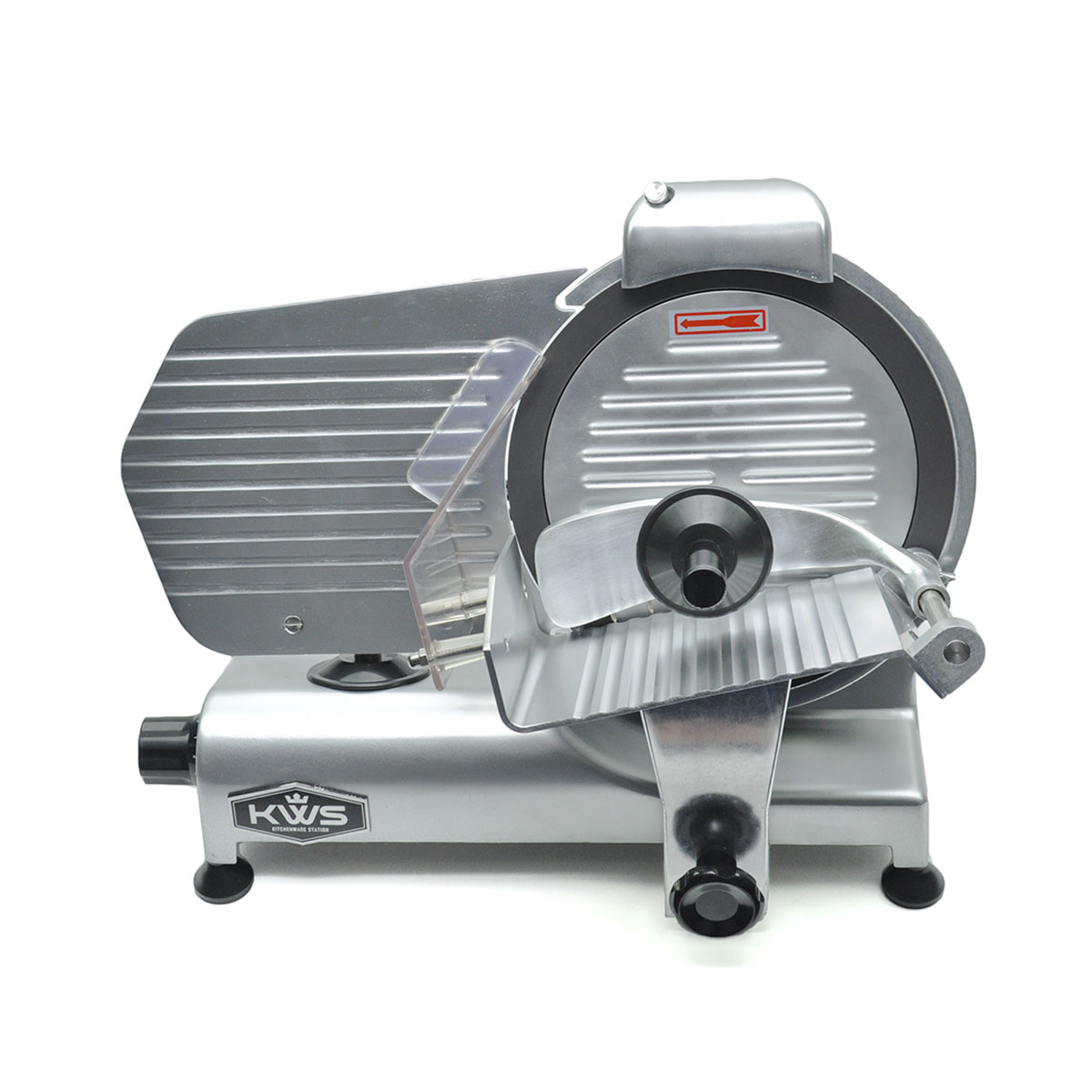 The new Non-Sticky Teflon Blade is better for cutting cheese. The KitchenWare Station MS-10NT 10″ high quality Teflon blade commercial semi- automatic electric meat slicer in silver is perfect for commercial use, home use, caterers and chefs etc. MS-10NT 10″ features 320 watts of motor power for commercial applications, it is perfect for slicing meats(recommended), vegetables, cheeses and fruits smoothly, quickly and effortlessly up to .4″ thick (0-10mm) with the numerical scale knob. MS-10NT 10″ also provides a built-in dual whetstones sharpener and ring guard assembly for the blade, which is more convenient to keep a razor sharp edge on the blade, and safer to use. The slicer’s blade of KitchenWare Station MS-10NT 10″ in silver is constructed of high quality 304 stainless steel; and the body of MS-10NT 10″ is made of aluminum alloy which are more durable and less likely to corrode.

Unlike some of the carbon steel blades on the market which has a shorter service life, is easily oxidized and blunt out. Our KWS 10″ high quality 304 Stainless Steel coated with Teflon blade is anti-rust, firm and more durable. It offers precision while providing several different slice adjustments. It consistently and effortlessly cuts meat, vegetables, or cheese from paper thin to 0.4 inch thick.

Our advance Teflon blade model can efficiently prevent residue from building up. With that being said, customer do not need to wipe off the excess of produce off of your blade as often during slicing process when using Teflon blade as compare to stainless steel blade. If you are someone who wish to slice a lot of cheeses, we will definitely recommend you to our Teflon blade model.

Our KWS slicer features a built- in sharpener that both hones and sharpens the blade. It helps the blade to maintain a sharp edge for slicing by pushing the front and back button for a couple of seconds, ensuring that your blade is always razor sharp and ready to slice.

The KWS on- off switch and relays are built separately which can highly prevent them from damage together at the same time. The skid proof rubber feet secure the slicer on the counter-top while slicing which makes the slicer more sturdy.

The product tray of our KWS MS-10NT meat slicer can hold foods up to 7 (L) X 7.5 (W) X 5.5 (H). The carriage can also be removed easily for thorough cleaning. This feature can reduce seams and hard-to-reach places where bacteria can grow, making the slicer as easy as possible to clean.

Thanks to the 320W 0.4 hp motor and power transformer, it delivers the power needed to tackle constant slicing. The High quality pure copper motor gives the KWS slicer an ideal blend of durability and performance. And the transformer can efficiently prevent electric leakage and short circuit.

Item arrives in packaging that shows what’s inside. If this is a gift, please request for information to be hidden under note during checkout.

Add a review Cancel reply
FAQs+
Q: how do you sharpen blade with guard on or how to remove guard?
— Asked by greg r slominski on 12/21/2019
A: For customer convenience, our company uploaded a video on YouTube regarding how to properly disassemble the machine for cleaning: https://www.youtube.com/watch?v=wl6pzcHa8X8&t=24s As regards to sharpening instruction, customer can sharpen their blade by push the front and back button of the provided built in sharpener. If you need a more through instruction, please feel free to contact our customer service team directly, one of our customer service representatives will further assist you.

— KWS Customer Service Team
August 11, 2020
Q: country of orgion
— Asked by steve on 04/04/2020
A: KitchenWare Station is a U.S. based company. Our factory locates in China, we are also the provider to many brands within the US and internationally for over 27 years. KWS as the direct brand to the manufacturer, we have the advantage of having the improved model and better material quality. We hope this answer your question.

— KWS Customer Service Team
August 11, 2020
Q: Hello. I purchased this item(MS-10NT 10″) about a month ago and love the product. However, while I was cleaning this, I accidentally lost the blade screws(item #81 from the product manual). I am trying to purchase this and will you be able to tell me which size(length and width) I should purchase please? Thank you in advance.
— Asked by Soo Park on 05/09/2020
A: For customer convenience, all parts can be purchased directly on our official website. For your reference, the following link will take you directly to the purchasing page of our blade screw: https://www.kitchenwarestation.com/product/part-57-blade-holding-screw/ We hope this answer your question.

— KWS Customer Service Team
July 22, 2020
Q: where is this slicer made?
— Asked by derran broyles on 05/14/2020
A: Thank you so much for your interest in our meat slicer. KitchenWare Station is a U.S. based company. Our factory locates in China, we are also the provider to many brands within the US and internationally for over 27 years. KWS as the direct brand to the manufacturer, we have the advantage of having the improved model and better material quality. We hope this answer your question. Please do not hesitate to contact us if you need further assistance, we are always here to help! KWS

This question has not been responded to yet.

Have a Question? Submit it here!